The earliest wrecks on the South African coast were probably those of ships that came from the East. Local tradition tells a story of a bird with two wings that came out of the sea and smashed itself on the reef at Msikaba near Lusikisiki. Arab dhows are known to have been involved in coastal trade in Africa, since the ninth century BCE. 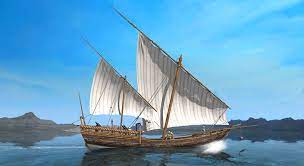 “A bird with two wings”

The documented history of shipwrecks in our area starts in the 15th century as explorers began to look for sea routes to the East. First came the Portuguese explorer  Diaz (1488) followed by Vasco Da Gama who made it all the way to India (1498). A trade route to India and Asia was established and more and more ships travelled along the coast of Africa.

In 1535 an adventurer named Diego Bothelho sailed a small converted rowing boat along our coast and  went ashore somewhere in St Francis Bay to look for fresh water. We know this from the writings of another seafarer and lifelong explorer named Manuel Perestrelo.

Perestrelo survived a shipwreck on the Wild Coast in 1554. He walked  2400 km to Sofala in what is now Mozambique. Undeterred he returned to sea for more travels and surveys on behalf of the king of Portugal. During these explorations he named  the bay north east of Seal Point Baia de San Françisço in 1575.

Records show that from 1726 to 1750 nearly 2000 ships called at Table Bay. This was only a percentage of the ships that sailed for the East but it gives an idea of just how many vessels were out there.  (Crampton, H. (2004) The Sunburned Queen. Johannesburg. Jacana.)

The southern coast of South Africa is worldwide known for  strong winds. In summer the east winds blow, creating a wild sea and causing the Agulhas current to run very fast towards the south-west. The south-westerly winter winds push against this current and this creates dangerous large waves. Also, the strong flow of the Agulhas current runs very close to Seal Point where the lighthouse is situated. Here it meets with the shallow continental shelf (where landmass and ocean meet under water).This creates a strong inset (counter)  current which carries ships (often unnoticed by the crew) towards the shore and into trouble.

The earliest described shipwreck on our own part of the coastline was that of the Noord. This ship had been sent “to purchase the Bay of Natal and surrounding lands”. She ran onto the rocks on 16 January 1690 “14 mylen” west of St Francis Bay on a reef at Klippen Point. The crew was able to step ashore and began the  walk to Cape Town. Only 4 made it to Cape Town, arriving at the end of March, and were able to tell the tale. One can walk to Klippen Point from Oysterbay to visit this area; a 6 km roundtrip.

Some stranded sailors, who sometimes were criminals or deserters, didn’t want to be rescued or return home and they assimilated into local communities, as did other survivors from ship wrecks but therein lies another tale.

On 21st of August 1851 the schooner Spy, a trading vessel, was wrecked in St Francis Bay during a south-easterly gale. The entire crew was rescued.

Also in St. Francis Bay lies the wreck of the Lady Head which sank in 1859. The story goes that she had on board several swans that survived the wreck and settled on the Kromme River. Until some years ago swans were common on the Kromme. Sadly they have disappeared. Swans on the Kromme river (Photo:The Monument Around Us)

A contemporary report by Magistrate Mr C. Cox gives interesting details about this wreck. “The place where the Lady Head met her fate is close to the mouth of the Kromme River and forms part of a bleak and jagged line of rocks which, on more than one occasion, have been at once the witness and cause of similar disasters.” The Lady Head was homeward bound from Rangoon with a cargo of rice; she carried a crew of 26 of which only three survived.

A street in St. Francis Bay is called Lady Heal, but according to later research by Mr Colin Urquhart she was actually named the Lady Head.)

The well-known HMS Osprey, a Royal Navy warship that was returning from China, was wrecked about four kilometers west of Seal Point light during the night of 29/30 May 1867. Not much of value has been recovered from this wreck, though divers have brought up coins as well as hundreds of large copper nails about 150 mm long all bearing the arrow stamp of the Royal Navy. A cannon still lies on the bottom in about three meters of water The Osprey carried a crew of 83 of whom only Stoker George Devreaux drowned whilst trying to bring a hawser from ship to shore. Lieutenant Mead eventually swam ashore with a life line and after a tremendous struggle managed to secure it on his second attempt.

If you take a walk on the Wild Side (click for link) you will find remains of her boiler on the beach about 3 km west of the lighthouse.

These two items were found near the wreck of the Osprey and confirm the link to the British Royal Navy (Note the down pointing arrow). A down pointing arrow is a Navy mark A Navy button found near the wrecksite Part of the rusted boiler still visible on the beach

The anchors on display at the entrance of the Irma Booysen Nature Reserve have been salvaged from the barque Eliza and Alice wrecked in 1870 at Mostertshoek, west of the site of the HMS Osprey.  She was on her way from Sweden to Algoa Bay but became another victim of the inset currents. The walk to Mostertshoek along the Wild Side (click here) is a 6 km roundtrip from the parking at Sunset Rock. Anchors salvaged from the Eliza and Alice The barque Derby before it was wrecked

In April 1895 the Norwegian barque Derby ran into trouble in a fierce storm off Tsitsikamma and broke up on the rocks about 6 km west of Seal Point in Cape St Francis. The ship had 14 people on board including the captain’s daughter. Boats were launched and most were able to row ashore but four crew members who stayed too long on the ship drowned when it broke up.

The wreck of the Cape Recife lies a few hundred meters west of the light house. This incident occurred in February 1929. She was in ballast and no lives were lost. Pieces of the wreck can be found in the gully where she grounded near Johnson’s Pool at Cape St. Francis. Her propeller was salvaged by Leighton Hulett using his boat Moby Dick in 1979. 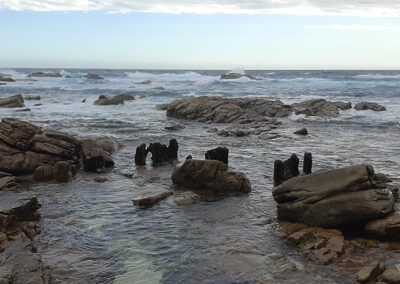 Not all shipwrecks end badly. The  Barcelona, a fishing boat from Port Elizabeth (Gqeberha), just drifted  onto the Cape St Francis beach. It was a foggy night and the sea was so calm that the crew did not know that they were aground until awakened by an early morning fisherman who woke them up by banging on the hull The catch of fish was salvaged by local farmers and trucked to Port Elizabeth. The Barcelona gently beached itself on Cape St Francis beach

The Jeffreys Bay Shell Museum between Da Gama and Diaz Road in Jeffreys Bay has an interesting display on local shipwrecks.